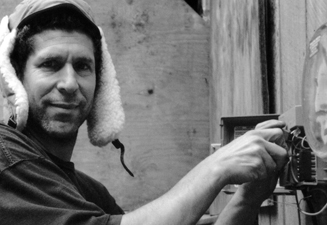 is a movement artist, performer, and teacher known for bringing the process of living movement into the studio and onto the stage. He sees dancing as the imagination acting through the body. His work looks at movement as a physical dialogue with the environment.
In the early '70's and into the '80's he played a central role in the development of Release Technique with Mary Fulkerson and Contact Improvisation with Steve Paxton.

He was one of the founders of Movement Research in NYC (1975). Together with Mary Overlie, Wendell Beavers, Cynthia Hedstrom and Christina Svane, among others; he played an active role in defining the initial conception of this seminal organization: designing new programs, curating events, teaching regular classes and offering intensive workshops.
Living in New York City in the '80's Daniel performed in the works of several choreographers including: Trisha Brown, Mary Overlie, Judy Padow, & Nancy Topf. In his own solo and group work he experimented with the elements of voice, text, film & video,  photography, interactions with physical objects, and constructing sets for performance.

From 1982 to 1987 he was a member of the New York based improvisational performance ensemble "Channel Z". Channel-Z's work investigated the spontaneous, focused, and deeply physical movement states occurring in Contact Improvisation and developed the compositional potential of this approach to address all aspects of theater.
Over the years Daniel has engaged in several long term and important collaborations with other performing artists including: Lisa Nelson, Steve Paxton; Paul Langland, Saira Blanche Theater in Moscow (Oleg Soulimenko and Andrej Andrianov), Hungarian experimental musician Dora Attila and Japanese dancer, Sakura Shimada, among others.

He has published numerous articles articulating concepts that are central to his approach to dance making. These writings appear in Contact Quarterly, and Contredanse Publications in Bruxelles. He was the artist director of “Physical Dialogues” and together with Mira Kovarova , created an international eastern European dance festival in Bratislava, that looked at systems for researching movement.

He has an ongoing interest in sound and video compositions, photography, singing and playing the guitar, mathematics, & house building.

We look at movement as a form of communication and a real time physical dialogue with the environment. We consider the form and composition of these interactions as a language for making dances.

Study and play with the basic patterns of walking, rolling, crawling, running, pushing, and pulling, together with material from Contact Improvisation, Release Technique, and my own research re-simulates our body's  innate understanding of how to move and extends our strength and range.

The "movement of attention", a deep and basic ability, is used as a tool for becoming conscious of what is unseen. Blind dancing, snapshots, stillness, moving slower or faster than our normal speed, alternate ways to use the eyes and experiencing space are techniques that bend and warp our relationships to the environment. Focusing on specific aspects of our experience: vision, sound, touch, stretch, gravity, force, time, rhythm, and more, allows us to appreciate the details within our sensory experience, perceptions, and actions.

Through this play we re-form and expand our images and ideas of what is going on when we move. Our research forms a base for a shared physical language, supporting spontaneous and precise solo and ensemble compositions.

At the end of the workshop we will each create and show own own short solo or duet compositions combining our own ideas with the materials from the workshop.